Around 9 am Monday 16th of May, the Military Police was called by a citizen who claimed to have come across a body on a side road in the municipality of Goiandira. At the site, police officers located the victim, apparently transgender, who had injuries on her head. Elements from the Fire Department provided the appropriate aid and sent the injured person to the Santa Casa de Catalão emergency room, but the victim that was not carrying any documents had to be transferred to a hospital in Goiânia.

Under the circumstances  investigations were carried out and the alleged perpetrator was identified and arrested in a farm in the Cumari municipality by policemen of the 18th Battalion. The suspect was then presented in the Goiandira Police Precinct.

The victim, identified later only as Paula, died four days later, on the 20th of May..

“If you keep looking at me, I’ll give two shots in your face.”

Thus began the attack on the transsexual student Italo Costacurta Rodrigues, 23, in the early hours of May 22nd. Kicked for at least two men, she had a broken leg. 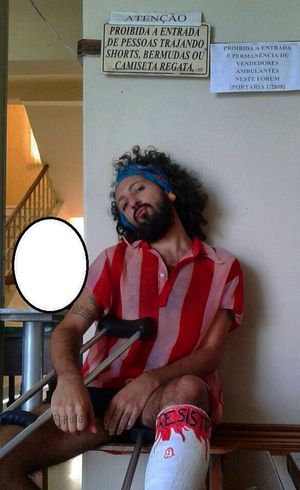 The attack happened in Presidente Prudente (560 km west of São Paulo), at the Parque do Povo during the Virada Cultural Paulista (a cultural event).

– I was talking with a bunch of friends when a guy passed on our side. He said I was looking at him and that if I did not stop to look, he would give two shots in my face. [He said] I was interested in him and it was easy for him to give two shots and walk. A friend of his saw [what was] going on, came to me and started kicking me.

Italo is a nonbinary transsexual, ie she does not recognize herself as a man or a woman. She says that she “flows between the two genres,” and as she identifies herself more with the feminine, she wears makeup and women’s clothes.

After receiving the first kicks, Italo fell to the ground and began to be assaulted by the two men and “more guys.” An acquaintance entered the confusion and helped her get out.

She ran to an electronic music tent, where there were more people, but had to flee again because the attackers continue to chase her with sticks.
Italo only managed to protect herself when she came to a snack bar, where staff called the police. Taken to the Santa Casa of the municipality, tests revealed a fracture in the leg.

Three days after she filed a complaint in the police, but hardly the perpetrators will be identified, admits the deputy Marcelo Quevedo, Prudente police coordinator.

I talked to the case leading investigator. He talked with her twice, but we have nothing regarding the authorship. It is an investigation that mainly depends on the victim because the place is devoid of cameras. And it happened on a day where there were people of the whole region in the city because of the cultural event, which also hampers the establishment of the authorship. But mostly we depend on the victim’s recognition.

First year student of geographics on the Unesp (Universidade Estadual Paulista – paulista state university) of Presidente Prudente, Italo belongs to K-iá, that makes artistic performances on the streets and schools in the region. 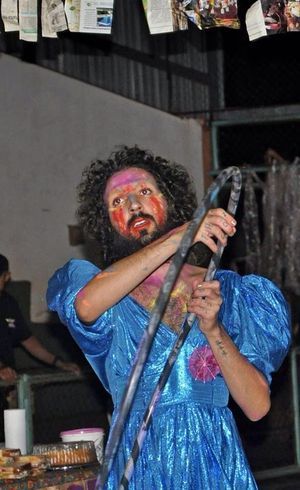 The aggresion happened while she was participating in an intervention with hula hoops and facial paintings. According to Italo, being a woman on a man’s body was the cause of the beating.

— Prejudice. It’s absurd to say you’re gonna kill someone just because it’s looking at you.

Brasil lacks of info on violence against LGBT population. São Paulo state securiry agency don’t know how many LGBTs are attacked in the state for there are no data on the subject. Also all crimes are labelled as homophobic ones, since for the government, transphobia does not exist.

According to the most recent report — published in last february but refering to 2013 —, the most common aggression is psychological violence (40,1%), followed by prejudice (36,4%) and physical violence (14,4%). Among the physical aggressions, which sets the most obvious violation of human rights, half (52.5%) are injuries, as in the case of Italo, followed by abuse (36.6%), attempted homicides (4.1%) and homicides (3.8%).

As it is largely known, Brazil is the country where more murders of trans people happen. According to TMM – Trans Murder Monitoring, made by Transgender Europe (TGEU), between January 2008 and April 2016, 2115 murders of trans people were reported worldwide. The most violent region is Latin America, with 78% of the crimes (1654), with Brazil leading the way (845).

GGB (Grupo Gay da Bahia) is a NGO that collects info mainly from press and other NGOs around the country. Data collected indicats that last year (2015) were murdered in Brazil 318 LGBTs: a crime every 27 hours. Of these, 52% are gays, 37% transgenders, 16% are lesbians, 10% are bissexuals, and 7% are straights mistaken for gays. Unfortunately this data is not accurate for some trans murders are labelled as homophobic ones. Transgenders people are the most endangered ones.