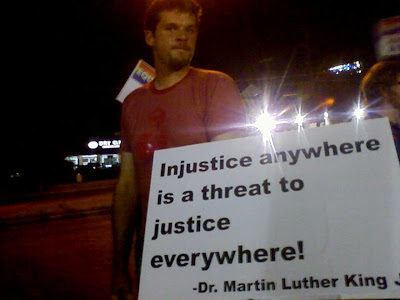 Moving across the country like a tsunami of awareness, activists have begun to coalesce into a tidal wave of action growing with intensity and frequency as we cascade onto the ivory towers of social intolerance, ignorance and religious paternalism.

Like the days of our forefathers these riders of the storm brave every element and indecencies hurled at them. The foe, the Mammoth Corporate entity self titled “the human rights campaign” or HRC is the machine of the powerful, reaping millions of dollars a day in tribute to pay for its revisionist domination of the LBTGQI lifestyle and the intense desire it has to exclude the MAGINLIZED, or as known within the privileged circle “THE ALPHABET soup people”.

We are the riders, workers, labors, the downtrodden, socialists, outcast transgender, effeminate gay man, masculine woman, feminists , allies, gypsies, artists, singers and dreamers. We are aware that to be still against the unceasing attack of HRC is to parish.

We of the national Gay, Lesbian, Bisexual, Transgender, Intersexed, Asexual, Gender diverse, Questioning and allies will sooth our wounds from battles fouht with the blood and sweat of our comrades in Boston in preparation and anticipation of our turn to once again face this giant.

There is a gathering of forces QUEERTODAY.COM which will help to empower you in you desire for true equality.