I have received calls from as far as California asking me about Who is mad at HRC and why? What is HRC’s response?
“Why are transgender people so mad?” I will speak of my life.

I am in a place I never thought to be. I recently became aware spiritually and received saving grace and salvation through my church and minister. I sought Jesus Christ to help me in transition and I received unconditional love.

An irresistible force drew me, a transgender woman to the Methodist General Conference 2008. I was given an opportunity to be a participant in the Struggle with people who so lovingly desperately desire what I was experiencing in my church, not just conditional admission but full inclusion. I believe many understood it is my love of Christ and the Reconciling ministries(RMN) devotion and commitment to radical inclusion that kept me at FT Worth even after learning that Pastor Phoenix would be allowed to return to his church.

Then the unthinkable began. I found myself in disbelief since attending my church as members of my congregation who’s Churches second mission statement Does not “stand idly by” in the face of inequity and injustice seemed content to remain unaware and unconcerned with the spreading violence targeting the gender diverse.

With much prayer and thought I concluded that the church was responsible to be at least aware of and hopefully address the murders and mutilation of transgender people who are from 10 to 1,000 times more likely to be murdered.
It became my understanding that my church and social organizations are as responsible as the very same people who commit this violence because they have CHOSSEN to remain silent or have in fact perpetuated the conception that Transgender lives are somehow LESS than gay or lesbian lives.

I authored and circulated an online petition asking that Bishop Robinson of the New Hampshire Anglican Diocese that he not support spiritual violence by not attending the Human Rights campaigns(HRC) Dallas fundraiser in November 2008. We Queers believe that although HRC has done much to benefit transgender people it committed an unrepentant atrocity against us by not following thru on its promise to commit only to a gender inclusive ENDA.

The copies of the online petition that I handed out were folded and put in pockets as the person I was talking to eyes rolled back with promises to read it later.

I have spent hours with local Ministers and in one conversation with my transgender minister I learned that he was planning to attend the D.C. HRC pastors call. I asked my pastor to please consider my request he not go. He promised me he would think and pray of this as we do in the Reconciling Ministries. It is the act of conversation that is to me, all important.

Two weeks later I asked my pastor his thoughts and he said he had not given it consideration and would I send him some more information. I found this to be intolerable. I sat in the foyers before service and watched as the $8 “Would Jesus Discriminate” tee shirts were being sold.

The hypocrisy and timing of his made me so mad I made my own sign. 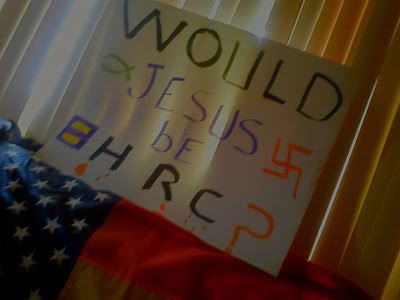 And I stood outside the church as people were going home. I was asked by offended people “is this something to do with that paper you handed out?” and “I supported you transgender at the Methodist Conference” and “What is HRC?”.

MY shame and sorrow excaberated when my pastor called the next day to tell me that everyone wondered why I was mad at the church. He also said in that 20 hours since Sunday he had become fully aware of 20 years of previously unknown LGBT history and had decided that he was going to support HRC. It is my opinion that he did fully understand the reason why I was angry Sunday and decided to let the congregation focus their anger at me and my perceived rejection of the church. Call it dis or misinformation, it jeopardised my life and boils down to the deception which enabled spiritual violence, the very thing I am campaigning against.

We are rejected and marginalized by our Churches, social organizations, legislatures and Judicial branches. We are angry at the intentional ignorance of many Gay and Lesbians.

So now I am feel alienated by what is most important to me, my church. I hurt so much. I am asking for your guidance. How do I reconcile my anger and return to my church.